Volume formed in 2004 and state that they’ve spent plenty of time honing their sound. Some decent support slots for Tom Vek and Dive Dive have got them a decent local fanbase, but it’s time for Volume to move onto a larger stage.

A very accomplished concept of rhythm and piano-guitar interaction form the intriguing sound of ‘Are We Winning’. Things build up after the verse to a fast section with equally stumping beats that would appeal to Rush fans in a way the music itself probably wouldn’t.

The style on offer is an indie/emo/rocker mix that suggests Volume draw from whatever genre they feel adds the most to their music – whether that’s the kooky guitar sound or the Musey sythesiser runs. The gutsy section isn’t quite gutsy enough – it hints at a stomach cramping emotional delivery that only ever comes across as vaguely displeased and that’s the only thing wrong on the whole record.

The second track, ‘Do The Knowledge’, does nothing to help those fans that want to buy the ‘play along to Volume’ guitar book. The drums lead the way through a sudoku grid of idea that lays an absolute minefield of chops and changes for the budding tribute band.

The Millennium Dome had a room playing a never-repeating tune to the accompaniment of fading lights. Volume apply this concept to their rhythm, hardly returning to any section throughout their songs.

‘Blind’ is a bit more predictable with an audible verse and chorus amongst the clever stuff and the chorus is a corker too, so it’s not a disappointment when the drummer plays 4/4 for a few minutes!

Volume are a clever band. This will probably get them a few comparisons to Radiohead and Muse, but they don’t really sound like either, even when they add a bit of Muse-distortion to the vocal. It’s more along the lines of a rockier version of The Kooks playing clever experimental songs. 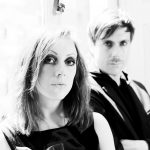