The Immediate
All the Rage

Scooter-restoring fashionistas, The Immediate, are a combination of The Small Faces, The Libertines, and Arthur Lee and Love. They seem to enjoy a sporting rivalry with those from their local scene that don’t share their penchant for indoor scarf wearing.

It takes a few bars to understand where ‘All the Rage’ is headed, with a ringing guitar chord followed by a bit of bass. However, once the syncopated guitars kick in things get a bit clearer. It’s a retro two-tone sound, but it is mixed with a bit of rock and roll in the chorus.

‘Loyal Union’ treads the same path, although it takes the form of a slicker number with a get up and go rhythm and strong vocals. Indeed, the vocals are a highlight in both tracks and the simple instrumentation in the quiet moments give Faye Hurst room to shine.

The Immediate are very entertaining while managing to make the sort of record you wouldn’t be afraid to play in front of your gran.

Anti Product - Made in USA LP 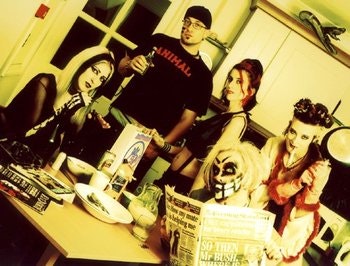