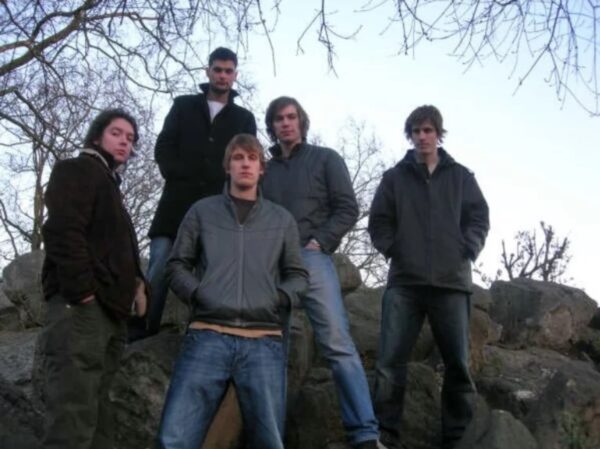 The Lark in a Park is an incongruous venue. Set just a few paces away from the trendy streets of Islington, it has country pub feel and a selection of locals to match. Whispering the password and performing the secret handshake (not really, but it would’ve been fitting), I step over the threshold into a throng of long-haired, leather trench coat wearing ‘misunderstood’ types.

The large selection of battered T-shirts boasting aging 80s metal bands should have set off alarm bells in my head. Is that Wayne and Garth hanging out in the corner? Looking like a D&D convention, the warm-up acts play deafening, unoriginal homage to Metallica and the like. My ear-bleeding indignation quadruples when I observe the sound man sitting NEXT to me wearing earplugs.

Headlining such a niche warm-up is no easy task, especially for a contingent of trendy, pretty boys like The Della Roccas. While my mood lifts to see a band with sensible haircuts and a sense of style take to the stage, the Goth gathering recognise their schooldays’ enemies and make a beeline for the door.

Completely unruffled by the mass exodus, lead singer Jonny drags nonchalantly on his cigarette as the pacey set kicks off. With one hand casually in his pocket he looks like he’d rather be anywhere else and summons the most enthusiasm to chat about football between songs.

But his supreme confidence and well-practised indifference reflect the knowledge that they’re onto a winner. Hailing from Sheffield, now is a good time to be a northern indie band, and their too-cool-for-school attitude is reminiscent of the Arctic Monkeys. But trendy outfits aside, Della Roccas know how to deliver a toe-tapping track and the set pulses with gritty rock riffs.

The music is unapologetic and in your face. It has the rapid tempo of early Strokes, with the fragmented, unpredictable edge of Razorlight. ‘Loose Change’ is good old rock track full of scratchy guitars, sprightly drums and excitable bass. But it is mellowed by the smooth backing harmonies which sound quaintly amateur, and a nice spot of whistling at the end.

‘Family Values’ has an epic feel, as dramatic piano chords rise and fall seamlessly within rapid marching drum interludes. Layered over all this are Jonny’s venomously delivered, biting lyrics in the manner of Mike Skinner. The words are so thoroughly enunciated that they sound like scornful spitting, adding a spine-tingling sense of menace to the trickling melodies.

‘She’s An Animal’ is an anthemic, punky number with the Sex Pistols written all over it. From the opening guitar riff that punctuates the whole track, to the frantic drums relentlessly driving the song forwards, it’s a burst of white-hot energy.

Considering the sparsely populated pub, another band might’ve side-stepped a track as self-indulgent as ‘Viva Della Roccas’. But confidence is not something the Roccas are lacking. As the last of the metal heads edge towards the door, they unleash the punchy finale without flinching.

This is surely set to be the indie anthem of the album; the self-conscious bad grammar and slang sung with reckless abandon by the fans. Performing the track with his eyes closed Jonny must be imaging this exhilarating moment. Perhaps he’s pretending he’s playing a gig where the poorly planned line-up hasn’t made it feel like such an anti-climax.