‘Blaze a Trail’ opens with a liquid guitar-type noise that is soon joined by a fat bass and a smart drum rhythm. This combination creates a thick mix of noise which backs up the MCing of the distinctive Ivory.

The lyrics and sound are true to Ivory’s Brixton roots, an urban UK sound with a voice that makes no attempt to hide its origin. There is also a crazy chicken section that sounds really good when it actually shouldn’t, and the chorus does enough to make this sound like a genuine seller. Additionally, there are also some noteworthy female vocals in both the chorus and during a broken-down middle section that gives an ambient and soaring pause to the driving bass tones of the rest of the track.

People always say one song isn’t enough to decide, which is absolutely true. This one, however, is pretty darn good.

Roger - This is the Shit LP 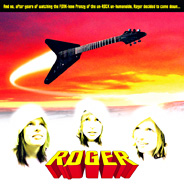