Canadian based Tuuli are a hard-touring band with something of an emo-punk sound and plenty of melodic hooks. ‘Here We Go’ is their latest release, featuring a total of thirteen tracks that all hover around the three minute mark.

With so many songs of such a consistently high calibre, it’s almost impossible to pick out the best tracks on the record without some kind of complex weighted scoring system. Therefore, with the help of several statistical mathematicians and a small committee of judges, the following songs were randomly selected by a computer!

‘Wake Up’ is the opening track and demonstrates rather well Tuuli’s ability to grab your attention and hold it. By using a generous splattering of instantly-appealing melodies and harmonies throughout, this track is something of a ‘pick yourself up’ anthem.

‘It’s Over’ is more of a love-tragedy, although the pop sensibilities remain the same with plenty of musical content to keep your focus. There is also a rather cute radio-friendly pop remix of this track at the end of the disk with the crunchy guitars dropped down low in the mix and some sparkly twelve string guitar slipped into their place.

Another example of greatness takes the form of ‘Rockstar Boyfriends’, which is really made by the imaginative backing vocals that pick out some of the venom in the lyrics.

‘Whipped’ is noteworthy with it’s darker sound and lyrics that contain a metaphorical theme of emotional S&M. Rich string-synth adds depth to the chorus and a flicker of class to the end of each verse.

Final mention goes to the title track ‘Here We Go’, in which rock and roll reigns supreme with a Sex Pistols style chord progression that tips it’s hat at the fifties bands that hugely influenced the Pistols take on punk.

If you like the sound of a female fronted pop-punk band with sugary hooks and some distinctively Green Day-esque moments then Tuuli are a safe bet with its plenty of instant grab.

Only time will tell if this infectious record has lastability, but after several spins already the sheen has yet to wear off on me.

The Void - The Void EP 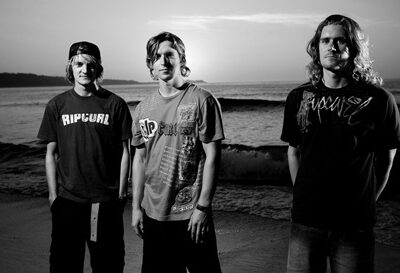