Southampton four piece Equilibria’s demo is a mixture of three live tracks and two studio recordings, although the quality of the live recordings is incredibly high.

‘Absence Makes’ is the first of the live tracks and contains a surprisingly mature vocal for a band that all come in below drinking age. In fact the whole sound created by this band is entirely misleading for their years, with this song coming from a distinctly seventies rock angle.

Second live track, ‘Lock the Doors’, is a more riffy affair with dirty guitars that could have featured on the ‘Greatest Air Guitar Anthems’ series.

The studio tracks drop in next with notable use of stereo and reverb compared to the live tracks, supplying a more polished sound to the still-retro tracks. ‘Losing His Mind’ is another riffy number, with some slapping bass breaks every couple of bars and ‘Not Got a Clue’, which is a mellow track with ultra clean guitars and warm bass tones.

The rather imaginatively titled, ‘Love Through a Fist’, finishes the EP on a live note with a long build up that sees the guitars playing off against each other before things crash in to a more contemporary rock sound. The riff in the verse is a rock-metal mix up as are the vocals.

Equilibria have got undeniable talent, as proved by the quality of the live tracks on the disk. The only thing missing from the mix is the finished big chorus line or killer hook that will ensure that they will totally dominate the subconscious. In the absence of this, what remains is still great, but in danger of being forgotten, which would be a complete injustice to the otherwise excellent songs. 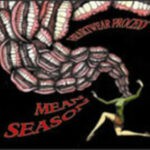