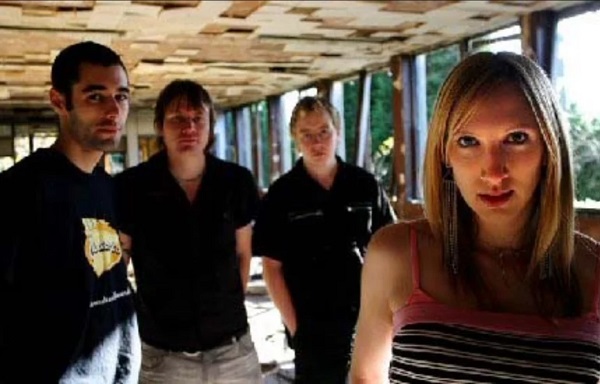 Dangerlust vs Hinterland
The Lust vs the Land

Released on 9th May 2005, The Lust vs The Land is a split double A-side single from Nottingham’s Hinterland and Sheffield-based Dangerlust.

Dangerlust get the first track and set things up with a noise-laden dirty rock riff that gets pumped out by a distorted bass, which then gets jumped on by a huge-sounding guitar at various points. Despite this spiky rock foundation the track has plenty of all-round appeal, with a mixture of vocals from the chaps as well as Rachel Santini’s lead. The chorus gets cast expertly like a big net with plenty of anticipatory build up before it takes off.

Dangerlust have an undercurrent of Elastica, with a more gutsy punch. The lead vocal commands a bit of angst power in the style of Guano Apes. This is sexy rock, with the kind of heaviness in the music that really sets of the drooling sex-kitten vocal.

Three piece lo-fi rockers, Hinterland, step up next with an edgy rock sound that sounds like its being injected in to your ear with a needle. The bass and guitars occupy a similar area in terms of pitch and dynamics which creates a vinyl-sounding thinness that strangely enhances the pumping bass drum.

Their offering contains a verse that slips between angry and, well, very angry indeed – before pushing out an immense chorus that kicks the TV firmly out of the hotel room window to land dramatically on the pavement in a shower of splintered glass – which paints a picture of their style better than a comparison to other bands could.

These two records make me want to hear more from both bands. In fact, if I can’t get hold of more I might well throw my toys out of the pram and cry.