Tonight The Joiners was all about writhing, swearing, and reluctant audience participation.

With the stage in darkness, Southampton four-piece Sarah Jane Smith launched straight in with heavy guitars, loud drums, and barely audible shouted lyrics. Looking a bit like a foreign band, possibly German, SJS’s mid-song references to current affairs went down like the C-word in church. The few phrases I could pick out were around themes of justice, vengeance, and ‘getting the bastards down’.

SJS have been going for almost ten years; they’re a good band who may have important political messages to get across, but unless we can pick out more of the words, it all just sounds like a bit of a racket. Much like Dr Who, where they got their band name from, some people (including me) just don’t ‘get it’…

A fantastically loud guitar riff signalled the arrival of spring chickens Rival Joustas and energetic frontman Tom jumped and strutted across the stage in a disturbing ‘is-he-having-a-fit?’ way, dancing like a Wheeler from Return To Oz. Like the crowd, each of the band members were engrossed in the music as the versatile vocalist scaled equipment with his back to the audience while the guitarist swung his long hair.

‘Animals’ was a mad song with distorted effects and an acoustic section in the middle where the drummer disembarked and strolled through the awed crowd with a tambourine. A slower, mellower track called ‘In Oslo’ about ‘being drunk and stupid’ gathered pace towards the chorus with well timed drums like a thumping hangover, while Tom yowled ‘I told myself I’d never get like this again’ in time with high guitar notes.

Crowd favourite ‘Clarity’ had electronic, sci-fi effects and dangerously screechy guitar plucking as well as dancier Franz-esque bits and rocky riffs. ‘Pinch’ is an interesting song with lots of staggered tempo changes and a high-speed chorus that keeps you on your toes as it switches from nice calmness to crazy nastiness; like the transformation the band themselves go through once on stage.

Rival Joustas are ‘in your face’ to the extent that members of the audience found themselves reluctantly taking part in the action. Like being picked for a Paul McKenna show, it makes the night unforgettable for the doomed victims who had lyrics screamed in their faces and microphones shoved down their t-shirts. The band commanded the stage musically and visually like true stars; with superb interaction between band members and tight changes, you could almost see the innovation and creation that’s gone into each song.

Capable of filling a much bigger venue, as long as their set remains exciting and varied, there’s no chance you’ll ever get bored of Rival Joustas. We need more screaming, swearing, sexy bands like this in Southampton!

In contrast, hyped headliner Selfish C**t didn’t live up to their scandalous reputation or the air of anticipation surrounding the gig. Half-naked vocalist Martin Tomlinson crouched with his back to the audience and turned around in slow motion, striking a tai-chi style pose and displaying his heavily darkened eyes and painted body. Hard on the ears and the eyes, at least half the room had emptied by the time the first break in the music came after twenty minutes, and those that remained were open-mouthed from boredom rather than shock.

There was no bass, and the percussion was shared between a drum machine and an actual drummer. Constable was excellent on the guitar, which varied from industrial to indie in parts, but both guitar and drums were just the backdrop to Tomlinson’s elaborate Freddie Mercury poses and Gollum-esque crawling around the stage. He menacingly and repetitively sang about Britain being shit and perhaps reminded many of their past lovers when he chanted ‘I’m going to fuck you and you won’t even know about it!’.

Selfish C**t tried everything to stir controversy and provoke a reaction, but even chucking beer over us and calling my hometown ‘a dose of the clap in your dirty pants’ only mildly annoyed me. Although musically better than you’d expect from a shock-rock band, Selfish C**t’s set was contrived and self-indulgent. They clearly take themselves very seriously, but it’s all been done before and there’s nothing else they can do without going the whole hog and getting banned from even more UK venues.

I’d hazard a guess that most people were relieved when Tomlinson dropped the microphone on the middle of the floor and stalked off leaving the drum machine still punishing the ears. 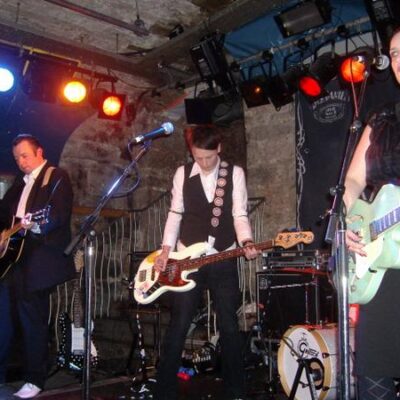