Arriving from Belfast resplendent with a black CD, this The Betes Noires’ offering combines their first three EPs onto one handy disc, providing a retrospective of the past year and a bit.

What’s interesting about cutting all these tunes to one CD is that it gives the listener a chance to hear exactly where they are now and, perhaps more importantly, how they managed to get there. The tracks are listed in reverse chronological order which is understandable as the now is always the most important however, to understand just why the most recent three tracks are nothing short of brilliant, it makes sense to listen to the CD backwards (that is in reverse order rather then in some perverse Satanical way).

So ending the CD and starting the review are the first three tunes from their debut EP, circa September 2003.

‘Black/Blue Ink’ is a distinctly indie tune which clearly has both REM and The Cure feeding its roots. The vocal delivery is reminiscent of Mr Stipe and this REM influence is also underlined by the subtle vocal harmonies of the chorus. Underpinning this is the melodically jangly guitars and high end bass on the verse which hark back to The Cure’s most successful period. Put these together with some simple yet effective drumming and you have a tune that sounds ten years old, but is certainly none the worse for it.

‘Plastercut’ continues the indie theme with chord progressions typical of the genre, only this time overlaid with some Bono inspired vocal work. The drumming adds to the early U2 feel with some stabbing snare work which is carried nicely to the last (first) track of the first EP, being ‘Show of Strength’. Here a church organ chord opens the door to a chugging tune which continues the Bono-esque vocal work. The verse neatly builds to the chorus which, while adding some decent backing vocals and more musical layers on each repeat visit, still manages to sound somewhat lethargic and plodding which is a shame given the quality of the previous songs.

However, that was all in the past as the second EP, released in March 2004, shows an evolution of creativity and sound.

Last (and first here) is the Smashing Pumkins affair which is ‘Clean’. Arriving like a slow moving dark cloud, the quiet/loud, clean/dirty contrast is accompanied by a drawn out vocal delivery with no hint of the canine one. An okay tune in its own right but amongst the other quality tunes on this disc it falls into the background, landing in ‘the only to be played on a gloomy Sunday afternoon’ category.

Which is certainly not the case with the menacingly brilliant ‘Yankee’s Troubled Birth’. A Lemmy inspired bass sound kicks off this super charged engine of a track and by the time the twisted indie/blues/rock guitar kicks in, you already know this has mosh pit written all over it. The appearance of some backing screaming towards the end of track simply adds to the dark and inspiring mood. As for the title well this one had its conception firmly on these shores being the bastard son of an unholy triumvirate between Therapy, Ash, and Motorhead.

In sharp contrast ‘The Future Is Missing’ is an uplifting driving track which follows a tried and tested formula, erring on the lighter side of indie rock. Jolly keyboards make an appearance during the second verse while soothing vocal harmonies pop up in the later chorus, all adding up to something Tom Petty would be proud to call his own.

‘Janet Puritanic’ marks the end of the second EP with an off-punk meets art rock effort. Initially the track sounds somewhat messy mainly due to the vocals which seem distinctly detached from the hectic music. However, repeated plays help connect the threads and after a few listens it starts to make a bit more sense.

So to the latest EP released September last year and to the three tunes that, along ‘Yankee’s Troubled Birth’, should mark The Betes Noires among the major’s most wanted targets.

‘Visceral Path’ kicks off this exciting triple bill with a strong post-punk Therapy influence and a bass sound which nods towards old Hooky from New Order. Here the vocals take a lighter approach to the other two newest tunes but still manage to retain some malice throughout the verse giving the track a real edge. However, it is the raw tempo that gives this track its excitement while ensuring yet another mosh pit filling tune for their set.

Penultimate track, ‘My Political Friend’, is slightly slower in place but still retains that strong Therapy influence in both the vocals and the driving off-kilter verse, before breaking into a bouncy chorus. The flat verse vocals add weight but manage to change gear nicely for the chorus and then go up a further notch for a bit of screaming right at the end. That said, it is the excellent drumming and hard edged guitar and bass, especially during the verse, that give this song its real power.

Finally we have the last/first track being ‘What We Lost in the Process’. A slightly mental keyboard signals that start of a thumping deep bass which soon picks up a spikey rhythm guitar along the way. Hints of Placebo in the vocals float over a rolling melody and the excellent production creatively layers several guitars, the bass, keys and drums giving the track a deep texture that just grabs your attention. If that wasn’t enough to keep up the rabbit in the headlights pose then the tempo changes certainly are, all adding up to quite a noise for a three piece.

In short, the evolution of The Betes Noires over the course of the three EPs is nothing short of dramatic when you consider the short amount of time they’ve achieved this in. While their earlier tunes were certainly good, The Betes have managed to carry on the best bits, add some new touches, and develop their own style, while still managing to ensure that every song remains distinctive in its own right. Impressive is certainly the word.

However, with shows coming up in London’s Brixton Windmill, three new tracks currently being recorded and most of these tunes available to download from their website, you really don’t need to take my word for it. 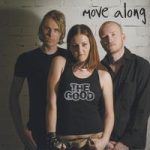 The Good – Move Along LP