Instrument-swapping swingers, The Zapatistas, are a three piece plying an angular pop sound with halting rhythms and detached guitars. This incredibly British sound morphs as different band members take on the lead vocal duties and create the identity of each song.

‘See Me After’ takes a riff reminiscent of modern Feeder and adds a British mod/punk flavour. The verse is a stuttered affair with a twinge of jangle about the guitars and the chorus is an off-kilter arrangement. The sound is similar for second track, ‘Mouse the Thief’, except it gets treated to something of a shouty vocal with husky edges. The chops and changes of this song elevate it a bit above the other tracks on offer by adding more variety to the arrangement.

The vocal stylings of Paul Weller seem to be an influence for final track ‘Curfew’. An urgent drum beat is accompanied by spikey guitars in the verse, with the chorus sounding smooth by comparison.

This record brings to mind a slow-motion black and white scene of a busy street with someone stood on a crate shouting at the flippant masses, with newspaper blowing in the wind and pigeons strutting around pecking at pieces of litter in the false belief that it’s food.

It’s definitely left-field, alternative-pop with a distinctly mod undercurrent – so it’s exactly the kind of thing that fans of The Jam and The Clash might be after. 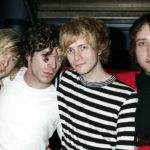 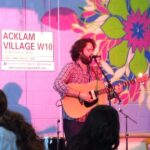