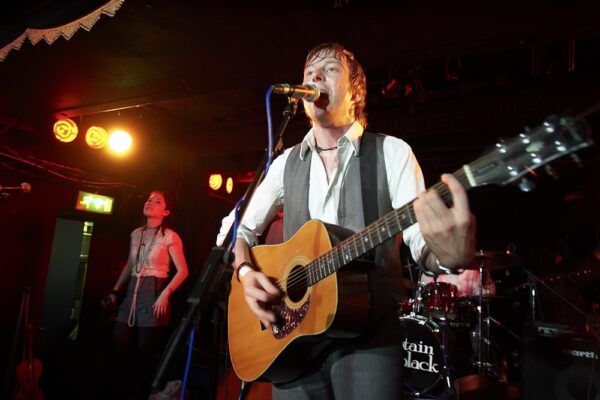 Adam Evil and the Outside Royalty
Eponymous LP

With a name like Adam Evil and the Outside Royalty it doesn’t take a genius to predict the word eclectic will pop up at some point during this review. In fact chuck in a few choice snippets like Rick Nelson of the Polyphonic Spree produced the album and giant candelabras and painted nude bodies often grace their live shows, and the description seems even closer to the mark. So lets get it over and done with then. Its an eclectic album.

Now don’t be put off by the feeling that this seven-piece from Pittsburgh are roaming the streets, fully cocked to weird you out because that’s not strictly the case. Going on the eleven tracks on offer here, more half-cocked seems the order of the day and, to my ears, that works just fine.

The album kicks off with a big sound in the form of ‘Get Ready ( Get Right)’ and what immediately hits you is that Glam Rock is still alive and very much kicking. However, to label it as purely that is unfair, as there is much more going on here. True, Evil’s vocals add a large dollop Ziggy Stardust / Brian Ferry to the mix however, the violin, cello and synths ensure that the song is an evolution of that sparkly era being bigger, wider and more melodic without losing any of the thrust of its predecessors ( much like Supergrass managed with ‘Life on Other Planets’). Add to this some acoustic moments and a few funky breaks and what you have is one of the best ear catching album openers I’ve heard for some time.

Grazing on this veritable smorgasbord of musical delights ‘Welcome to the Underworld’, ‘Yesterdays Girl’, ‘Love Song at the End of the World’ and ‘Liquid Leather Lover’ all jump out as being tastiest of the musical munchies on offer, so let me elaborate.

With an uptempo and subversive melody ‘Welcome to the Underworld’ musically underlines its title perfectly. Its dark, foreboding and not entirely of this earth courtesy of a few chunky guitar riffs, some nice synth work and the controlled yet rampant drumming. Over the top, Evil’s vocal delivery manages that perfect balance between tongue in cheek and, well, evil really, giving this dark track a big cheesy grin.

‘Yesterday’s Girl’ on the other hand is almost its opposite with an intro of delicate strings moving to an equally delicate guitar set to backdrop of quietly chattering people ( or is it ducks.) The whole thing puts you in mind of a slightly sombre autumn day in an English country garden with the lyrics connecting on an primal level making you think of all those lost loves and what might have been.

However, there’s not too much time for wistful thinking as mass destruction is looming just round the corner, all green and Martian like, in the form of ‘Love Song at the End of the World’. With a downright scary start initial impressions suggest this is not the sort of track to listen to just before bed. However, as is often the case in the world of pop, the end of the world is a happy occasion and this tune is no different.

Quickly lifting the tempo from its demonic beginnings ‘Love Song at the End of the World’ morphs into a bouncy little rocking number about dodging alien death rays in order to see poor Colleen stuck on the other side of city. But what’s the point if the world is going to end anyway, I hear you cry? Well it’s about getting that last kiss before we all go up in smoke – a worthy cause I think you’ll agree ( though I wouldn’t mind seeing a picture of her first before quantifying that last statement.) Definitely one to put on that ‘Armageddon Is Fun’ compilation along with other such favs as REM’s ‘The End Of The World ( and I Feel Fine)’ and Def Leppard’s ‘Armageddon It’.

So we’ve trudged the murky backstreets of the underworld, taken time out to contemplate all those lost loves and got through the end of the world without so much as an unstable tripod crashing through our greenhouse. Time to treat ourselves methinks, and what better way then with a bit of unadulterated perverted copulation.

Fortunately for us ‘Liquid Leather Lover’ dishes this up in abundance with such juice inducing lyrics as ‘She’s a liquid leather lover wrapped in PVC. An eroto-psycho-sexual howl in her tendencies’ Yeah baby! The music nicely complements the lyrical fetish fest by whipping up a tuneful storm with melodic, seedy undertones. The chorus is in your face while the verse builds perfectly all the way to the spaced out mid song break, where things swirl around for a bit, before joining forces to pump the track forward like a randy teenager who just broke into the girls changing room. Perverse, twisted and rocking, all in a handy 3 minutes – now that can’t be bad.

So with love, sex and death covered, what’s left to say? Well not much really only that, with excellent production, well thought out song structures, original and interesting lyrics and a sound like a Glam Rock wall of noise, ‘Adam Evil and the Outside Royalty’ is one of those rare albums that manages to grab your attention and keep hold it to the end, all on the first listen.

Impressive rather then eclectic is really the word.

Popular Workshop - All About Vicki EP 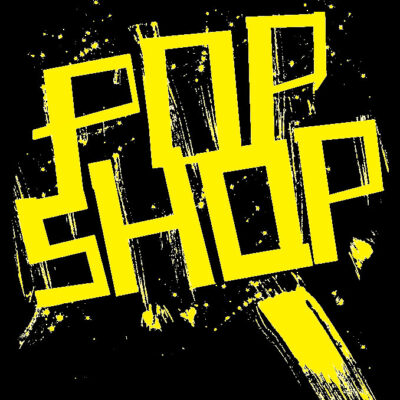