As the opening act on a Kerrang ‘one to watch’ tour, Glasgow act Fickle Public have been haring up and down the UK lately and seemed to enjoy being back on their home turf.

Opening up with an elongated instrumental passage, the scene was set for a bludgeoning half hour, with the tempo and drum thuds growing in pace and volume throughout.

After the yelped, gruff vocals kick in, the first song took a harder shape and was quite a pleasant surprise in that, before the song ended the heavy music paused and a crisp, clear lead guitar riff cut through and completely changed the tone of the track. With this opener, Fickle Public showed a depth of talent and styles that continued throughout the whole set.

The band was permanently jerking and bouncing throughout and the hardcore fans at the front of the stage were just as energetic. The rest of the busy crowd seemed quite interested in the act and the on-stage banter between fans and band was as spirited as any of the tracks on offer.

Although fitting into the current style of metal with pop sensibilities, the older fans may have recognised shades of that dark heavy Nirvana sound with touches of 90’s Metallica and Pantera coming through in some of the band’s more galloping guitar and bass runs.

‘Revel Revel’ managed to up the pace even more during the set but featured various pauses and lunges which chopped the song up quite a bit and left even the band in need of a breather.

The set mildly slowed down with ‘Non Stop Hot’, the bands only love song, but not conventional by any means. The pace may have been slower but there was still a dancing edge and the vocals were as pushed and forceful as any of the other tracks during the evening. The guitar was more akin to the sound of today’s indie bands, so if you like your guitar to be wiry or angular, this would be the track for you.

Closing with current single ‘Just Like I Got Used To Saying Courteney Cox Arquette’ ( a bizarrely titled yet clear quick rocker), the band received a rapturous send off from the crowd and with their debut album due for release in March, Fickle Public have definitely given their public a few things to think over. 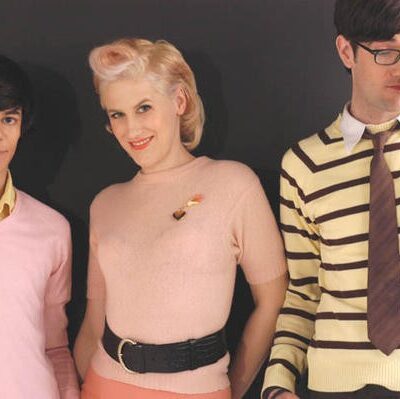