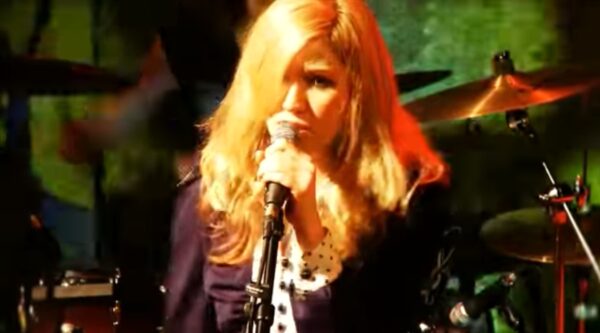 Now before I press on some of you may have noticed that also on the bill were The Colts. Unfortunately due to the extremely vocal support the band received from friends and well-wishers, I really couldn’t hear too much, so it would be unfair to judge them on this outing.

That said I did hear a glimpse of one of my old favourites ‘Jolene’, so the quality of their cover choices cant be faulted but the less said about that version and the karaoke accompaniment, the better. So on with the show.

Red Bee Society made a bit of a local name for themselves in 2004 with the superb guitar pop of ‘When We Talk of Horses’ but since then things have been a little bit quiet. However, with their debut album ready for release soon (mixed by Norman Blake of Teenage Fanclub no less) the band is ready to push on and performed a sterling slot in King Tuts.

Don’t let the suits and the cello fool you, there’s a vibrancy to the band and the fact that ‘When We Talk of Horses’ appeared so early in the set, with the remainder not sounding of any lesser quality, highlighted the musical skills on show.

With a nod to late 60’s guitar pop, the band easily pleased the crowd who had arrived early. The vocals were of a light melody and floated around the venue over the strong backing.

As a reintroduction to the band, the set was a great success and you should expect to hear more from the Red Bee Society in 2006.

Prototypes are a band creating a lot of fuss and there had been media talk prior to the gig that Ian McCulloch was meant to be singing with the band. The Bunnyman failed to show and for all the glam sneering of the band, and the group of kids pogoing down the front, the music didn’t seem to live up to the hype.

With the frontman pulling all his best rock poses in his best rock clothes ( with added eye-liner) and the rest of the band trying to inject as much enthusiasm as they could muster, the over riding impression was that they fell between The Bravery and Do Me Bad Things. Not that there is anything wrong with these bands, they both have loyal fan bases but they both appear to be acts that create more news stories and articles around them as opposed to selling records and winning people over.

The songs themselves were alright, the vocals were yelped, the backing vocals were pretty much spot on and the bass lines rumbled throughout, but it’s pretty hard to recall many choruses or passages of note. It would be wrong to write Prototypes off at this early stage but it takes a lot more than a great hairstyle, braces and all the glam posturing to live up to the billing the band was getting before they came onstage.

The night was headlined by Saint Judes Infirmary, firm favourites of The Mag, but featured their line-up with a change – Mark vacating the drum seat and featuring as an extra guitarist. For all that, the set still featured their usual combination of melodic guitar pop, such as opener ‘Montreal’ and the slower, powerful tracks like ‘PS Scotland I Love You’ with its Sweet Jane like bass-lines and rhythms giving way to a fuzz-toned squalor.

With the set showcasing many songs from their soon to be released debut record, the bands sound is getting stronger with every passing month and with the vocals being shared throughout the band, there is a sound that should please everyone. They already use a variety of instruments onstage with the melodica getting an airing and, although their first record isn’t even out yet, the band are looking to further expand their sound on their follow up release.

So many new acts get by initially on looks and image and, while Saint Judes cloak themselves in a great dark image, they are a band that takes topics ranging as far as politics, travel and everyday dreams and ambitions and bundle them up into melodic little masterpieces. Anyone who didn’t find themselves grinning along to the set closer, with its manic rhythm and its megaphone hollered vocals, probably doesn’t get the sheer beauty that mess and confusion can bring.

A really intriguing and interesting night, and proof that at, the end of the day, quality songs and talent will always offer more than hype and talk alone.