After a series of tube-related transport traumas, my entrance to 93 Feet East was breathless and littered with expletives. All attempts at punctuality destroyed, my mood was dark and in need of some gutsy rock.

Served up with impeccable timing, putting mine to shame, was opening band of the night – The Flow. At 8pm on a school night, it’s foolish to expect much of an atmosphere, but the four band members were already pouring with sweat as they pounded out rock ‘n roll beats to an adoring audience.

The Essex-based four-piece count Zeppelin and the Stone Roses among their influences, comparisons that could potentially set them up for a fall. However, they’ve steered clear of cheap imitation and crafted rich, meaty beats and riffs all of their own. You feel the urge to head bang, but in a mild, non brain-damaging way.

‘Million melodies’ is a rockier, revved up Brit pop inspired track with well paced drums and some nifty little guitar solos thrown in for good measure. The singing almost seems secondary as the guitars perform well-polished acrobatics in the background.

‘Have You Ever Been Down’ is a dark, edgy number. Refusing to keep still, the nimble-fingered bass evokes the scuttling of a particularly scary spider. It’s toe-tapping good and reveals a confidence that belies the band’s age. Lead singer, Dave Drew, struggles to match his vocals to the insuppressible guitarists.

The Flow have a penchant for epic instrumental interludes which carry the songs in their own right. The spine tingling drum solo punctuating ‘Nowhere Left to Run’ ensures nobody is left out. Nobody except Drew who is cast adrift at such moments and can do nothing but cavort around the stage.

‘Automatic’ was their final song of the night and The Flow’s forthcoming single. It bounces along in gravelly spirals of arching guitar riffs. Drew wields a tambourine as the undeniable flair of bassist, Dan Stone, is paraded with style and swagger. They are raw, unpretentious and enthusiastic: the crowd can’t get enough.

Hot on the heels of The Flow, the following bands of the night are an eclectic mix of electro rock, snarling rock, and ‘too cool for school’ rock.

We Yes You No take themselves surprisingly seriously while sporting matching orange jumpsuits. If Radiohead had in the 80s developed a love for electronica, this is what they would sound like.

The psychedelic, warbling keyboards have an infectious, slightly disturbing quality, made all the more uncomfortable by the lead singer’s angry face as he sings ‘I must destroy’. Then again, this is a band that wants us to know that the world is on the verge of turning flat, and like to begin most of their sentences with the same word. Pretentious? Moi?

Continuing the theme of matching outfits, LR Rockets appear on stage wearing white wife-beaters that they appear to have got the local nursery to draw pictures on. The hearts and stars are somewhat at odds with the uncompromising assault of snarling rocky riffs, and howls of the octave-spanning lead singer. Their sound is very ‘now’ – punky rock with overtones of the Yeah Yeah Yeahs and The Killers (if provoked).

The guitars are fast and frantic, yet the beat remains the same and I have trouble distinguishing between songs.

Last up is the most dapper band of the evening, Baby Strange ( still in matching costume – naturally). Thankfully they didn’t raid the fancy dress cupboard and ooze cool in their suits and shoelace ties. Adoring female groupies flock from the woodwork and vie for attention in a hilarious ‘dance-off’ that threatens to steal my attention from the band.

Baby Strange’s music is as slick as their suits, and they make plain old rock and roll anything but plain and old. Hailing from the States, they have the confidence only Americans seem to possess and command the stage with style. However, it is their eagerness to perform that hampers the music at times, as each member seems to be playing for himself and forgetting to listen to the others.

The heavy guitars create stomping riffs a little slower than The Strokes, but the deafening volume threatens to choke the melodies. Instrumental bridges between the vocals offer a much-needed breathing space from the crashing onslaught.

The riffs are catchy; the bass funky and the hooks clever, but until they all stop trying to win ‘band member of the year’, the more subtle nuances of the music will suffer. But then, surrounded by frantically dancing fans, who can blame them for being over-zealous?

Tagged: baby strange lr rockets the flow we yes you no 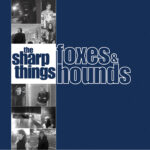