Having recently reviewed their eponymous LP, Kumiss had to live up to some high expectations. Happily, they did!

In the relaxed setting of Hythe Youth Centre, Kumiss played to a sizeable crowd that warmed to the band as the set progressed.

The first three tracks had a momentum of their own, with excellent rhythm from both Josh Carr on drums and Matt Blakey on bass.

Five tracks into the set and ‘Complain’, taken from their album, was blinding. Matt Richards injected a powerful vocal that was grittier than the recording – and it is fair to say that this is one of the most engaging voices on the local music scene.

The live rendition of ‘Civilisation’ was anthemic. At this point, the band could have been performing anywhere in the world, the performance was so absorbing. With such a strong live sound, you can expect to see them in a venue near you fairly soon.

As they grow in confidence by building up their experience with lots of gigs, they’ll be ready to rock a completely original set. It’s early days, but they could go a long way. 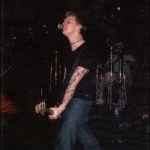 Milk Kan – Wat U See Aint Wat U Get