Penned for release on 31st January 2005 on Seeca Records, ’80’s Love Affair’ is the debut release of The Most Terrifying Thing. Now given that this is only one track it’s impossible to be sure but, it’s fair to say on this offering it does make it sound like these guys are pretty good.

Combining the hooky rock of Thirst and the power rock and roll of White Light Motorcade, ’80’s Love Affair’ is the kind of song (with its sections that build atmosphere, heavy breaks, and a smooth chorus) that makes you buy an album. The verse has a stuttered structure with fast hi-hat action and crispy guitars that power-up for the pre-choral build with a good flexible vocal that ranges from the powerful presence of the lower ranges to the higher melody in the chorus.

We don’t know much about this bunch, except that they come from Liverpool and clearly don’t want to play jangly indie songs. However, we now have high expectations of the next Most Terrifying Thing to drop through our letter box.

Tagged: the most terrifying thing 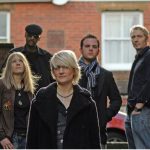