With the retro sounds of Franz Ferdinand mixed with a touch of the Strokes and the White Stripes; Vinyl Collide have served up three tracks of a quirky nature and bouncing pace.

‘Hurricane’ has a wild-west feel with lots of tom-work and swinging bass guitar. The chorus doesn’t quite lift itself from the verse, although there is a slight increase in volume. The best part of this song is the break down after the chorus.

Second track, ‘You versus Me’, is a bit more unique, though similar in style to the previous track. There is a bigger chorus to this track and a decent chord progression throughout the verse.

Final offering, ‘Elegance’, is the most eccentric track with a cheeky guitar riff and syncopated chords. A change of pace in the chorus adds a bit of creativity to the song. This is definitely the foot-tapper on this record with some nice stops and subtle removal of bass to add a little variety.

Although the initial track is a little lacking, the other songs more than make up for this with plenty of individuality and quite a bit of flair. The vocal is quite distinct too, with some moments reminiscent of Brit-poppers Marion as well as the more obvious influences starting with ‘THE’.

One to catch if you are into the bands mentioned above!

Get Amped - Too Far (Video) 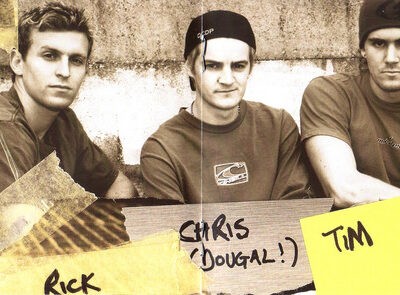