Calvoon will be Newcastle’s busiest band over the course of the next month, with more London dates than passion.com as well as trips to Liverpool and Leeds. The reason for all these gigs is the release of their latest single, ‘Come On’ on April 11th.

‘Come On’ rolls in to life with guitars and vocals that suggest the sound of vinyl, aptly letting everyone know where they first heard about rock and roll. Rather than teasing us with a pre-chorus build up or second verse before the chorus, Calvoon don’t waste any time and get stuck in after less than 30 seconds. Had we been kept waiting, the chorus would have been worth it with it’s simple ‘Come On’ chant, which presumably should be accompanied by a cocky pose and some sort of hand gesture.

The anthemic and upbeat ‘Last Chance’ steps up next with an appealing mix of six or seven Britpop bands in the chunky bass guitar, warm guitar sound, and Hammond organ. The bass is in charge of this track, laying down a great riff that is used well by the drums, and the chorus and is so hooky that by it’s second rendition its already lodged in permanent neuron storage.

Calvoon sound like they’re having a good time and that’s sure to attract a following of like minded individuals, although with that many people walking round with a swagger, people could start mistaking Newcastle for being a naval port.

Music that brings to mind a gritty, can-holding version of The Delays. 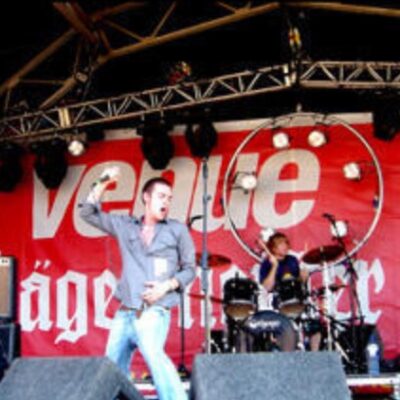