Following the release of ‘At the Beginning We’ll Start Again’ and the subsequent distribution deal with Manmade Records, Reserved for Nothing are back with a new EP in the form of ‘Romance is Dead’.

Starting with some rock-metal riffs and hardcore vocals, ‘Jive’ doesn’t use any clever intro tricks to impress, preferring to get straight down to business. The chorus, in contrast to the verse, has a slick melody and intelligent backing vocal that calms things down before the aggression kicks back in.

‘Finely Tuned Assassins’ has a more edgy style with bass that pumps a stuttered thread in the verse and an abundance of full-throttle guitars that eventually lead to a chorus that shows the delicate and vulnerable side of Sam Glasspool. Different treatments are given to the main straplines of this song, which adds a bit of spice to what is already a Therapy? style rock-metal anthem.

‘Shut up and Dance’ has a vocal-tennis verse followed by an angsty ‘Shut Up’ chorus line that puts Kelly Osbourne to shame. Plenty of different guitar layers add up to make an impressive multi-faceted sound that stands out well in the quieter moments. It’s then on to the urgency of ‘A Touch of Class’. This song is enhanced by the slower breaks that separate out each speedy verse. There is a Rival Schools style use of pounding guitar and bass riffs with stops to create plenty of interest.

‘Under a Weeping Sky’ ends this release on a slightly more predictable level than the one maintained throughout the rest of the record, although the stuttered/flowing play off works really well.

RFN are a band to interest the shady bunch of people who like the alternative stuff that still manages to chart (the modern equivalent of the top five or so songs in the ‘indie chart’ that managed to make it into the top forty way back when).

What this means is a load of angst, metal riffs, and rock melodies neatly packaged in catchy little songs that will make Reserved for Nothing the band that no fan can believe you haven’t heard of.

Tagged: reserved for nothing 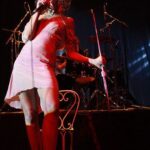