‘Be the Weapon’ has a satisfyingly edgy drive, existing somewhere in the middle of a glam/rock/industrial triangle and clearly comfortably in control of its direction. Pounding drums, big bass, guitar chunks, and some wiry keyboards combine with a gutsy glam vocal to create this rocker, which is a richly textured affair.

‘Mathematician’ is a quirkier number, taking all the same elements as its predecessor, but with an injection of pace and lots of stuttered stops and tangents. The slow break is reminiscent of a big Queen anthem, with Freddy-style vocals that get higher and higher as they oh and yeah their way back to the crazed and pacey style that opened this track.

The bass takes the main role for ‘Too Rich for Water’. Now, this isn’t a bad track, but in contrast to the two previous songs, it does seem to wallow a fair bit and doesn’t benefit from the quirkiness of ‘Mathematician’ or the edginess of ‘Be the Weapon’. However, this is a brief downturn before ‘Beyond the Day’ snatches the baton.

With a repeatedly strummed chord casting sinister sparks over the verses and a Scissor Sisters meets Smashing Pumpkins loud section, variety isn’t an issue – even before the church-organ kicks off. As Meat Loaf almost said, ‘three out of four ain’t bad’, and there are three incredibly different ingredients of a Corporation Blend on this EP.

As for comparisons, there are only touches and shadows with which to compare Corporation Blend and I’ve struggled to come up with something to help describe their sound, so bear with me here – all this hard work is just for you! You have to imagine something like the early Manic Street Preachers, with a touch of the Sweet, and added Marilyn Manson. However, if you think I’m not helping much, you’ll have to head on over to their website and check out the samples for yourself. 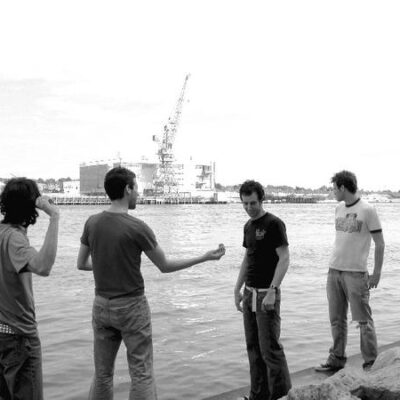