The final Unsigned Band Showcase of the year at BCSU, High Wycombe and, if the rumours are true, the last ever? I have to say, I was waiting with A LOT of anticipation for this gig as a bit of new meat at the union is refreshing to say the least.

First band on were Wycombe based A Genuine Freakshow. After hearing a lot of hype about these guys I was intrigued.

However, not entirely what I was expecting, A Genuine Freakshow were a tad sombre for the overall tone of the evening but they do have a really beautiful selection of songs, a mini string section and two great vocalists. And guess what, one of the Wutars is their bass player! Those buggers (can I say that) get themselves everywhere!

The two front men met while discussing Radiohead tickets and this influence is obvious. The overall sound is a bit experimental which I like but occasionally the tracks just don’t fit together. Every song seemed to start with punchy drum beats, heavy guitar strums and energetic strings and then dissolve into silence for the lyrics. It was kind of like being on a rollercoaster. The problem being once you know what’s coming the effect is lost. At times it can seem like two completely different songs however, I particularly liked the tracks ‘Cold Turkey’ and ‘Warning Shot’ which were both ‘shiver down your spine’ stuff and not bad at all.

Second up was High Wycombe virgins Mirno, who provided an edgy, totally rocking sing-along. However, this was the last thing on my mind when they appeared on stage as I thought we were going to be treated to Charlotte from Ash and Brian from Placebo’s new band, but that would probably be a bit strange anyway.

All of the songs possessed very catchy hooks and choruses. The drum and bass sound was fab and the band is obviously really tight. In fact so tight that they all have matching tattoos and even treated us to some writhing around on the floor in a mass Mirno bundle at the end! A special mention must also go to the production that they brought – their own roadies, strobe lights, and a smoke machine. Rock on!!

The band have been busy working on their forthcoming 1988 E.P which is driving us all insane because we want it and we want it now! The set, as always, was fast, electric and far too short. It was nice to hear a few chants of ‘more’ as the band left the stage, but to those of us who know them, Rocketchild are not an encore band, they get up, do it, blow you away and if you miss it, then more fool you!

As ever, Richie and co made me happy for the duration of the set with great songs such as ‘Last Night In Brixton’, ‘The Real Dorian Gray’ and ‘Black Pill’. It’s the song ‘The Real Dorian Gray’ which makes this band much more than a high octane punk/rock band. With the ability to write brilliant moving tunes that we all understand instantly, it’s clear to see the extreme song writing talent that lies underneath. Comparisons to Green Day are obvious as the band can produce absolute beauty in ‘Time of Your Life’ amongst the punk classics.

Rocketchild will blow your mind and your ear drums but they can touch your soul too and I never thought I would say that about Rocketchild. I’m certain they’re destined for bigger things than our student union and with 1988 a coming, I have the T-Shirt to prove it! 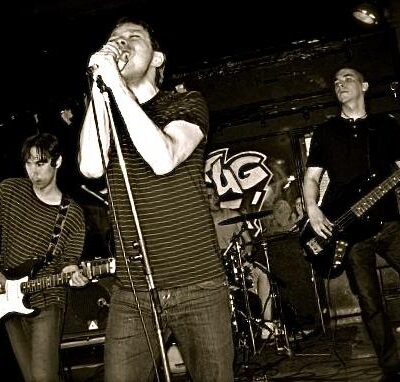