We are working out way through fifteen years of articles that we published, primarily in a music magazine called The Mag – but also in various printed magazines. Once we have the archive preserved, we’ll be forging ahead with new material.

You’ll see articles appearing starting from the oldest first (2002) and working forwards in time. Some might appear in the wrong order as we have a janky format to extract them from.

It might take some time as we’re performing minor edits on the way in. Nothing substantial is changing, but we’re doing a light touch to smooth out a few issues and ensure all of the Oxford commas make it into the new website.

Here is a quick look back at some of the key moments, including awards shows sponsored by Jagermeister and Original 106 FM, and some of the old looks. 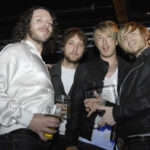