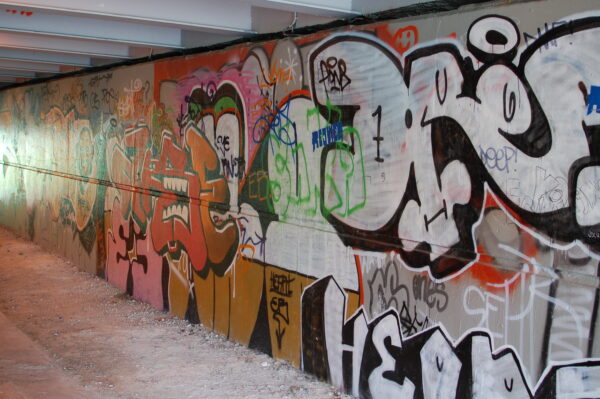 Graffiti. It’s everywhere, right. A sign of rebellious youth, appreciated by some and hated by others. If you drew a Venn diagram of disaffected music culture and graffiti appreciation, there would be a huge overlap. Except, what is this strange new category of graffiti applauders? It’s the selective recognition of re-classification of only certain artists to the new acceptable and celebrated version of graffiti that doesn’t count as vandalism.

It’s not the appreciation of graffiti that rubs. It’s the decision to arbitrarily classify some graffiti artists differently to others. This classification is already so entrenched that there are different names for covering over the graffiti. If you cover normal graffiti you are “repairing” it, but when you cover gentrified graffiti you are “vandalising” it?!

Graffiti is a type of art genre that means writing or drawings made on a wall or other surface, usually without permission and within public view.

There has been some attempt to retrospectively re-brand “desirable graffiti” as a mural – not based on prior permission, but on whether the work is subjectively of a certain style and quality. Of course, some artists who strongly associate with the graffiti brand are automatically upgraded to mural status – but there is a hypocrisy in (for example) calling Banksy a graffiti artist while also reporting that a Banksy mural has been defaced. If everything you create is a mural, you are a mural artist.

The plundering of graffiti culture to give artists an earthy tone is distasteful and the terms graffiti and mural should not be seen as interchangeable.

« The Dead Love – If You Say So
Bity Booker – Gone Bushwalking »