With a strong sound of their own, a rapidly increasing fan base, critical acclaim from all angles and their debut album, No Love Lost, primed for release on the Red Ink label, I was expecting a very hectic experience when granted an exclusive fifteen minutes with The Rifles. Imagine my relief then, to find the mood in their management company’s office relaxed with the band affable and laid back and ready to take success in their stride.

Your sound, image and lyrics have a strong identity to them. Is this something you’ve strived to achieve or something more organic?

Joel: I think its all pretty natural, to be honest – I’m not about to start singing in an American accent!

Luke: As far as our music and our fashion goes, there’s no ‘plot’. It’s just how we like to dress and we behave they way we always have.

Your peers, The Kooks, have been accused of being contrived and being image-led. Do you think some bands on the scene put too much emphasis on fashion?

Luke: I think the Kooks have some pretty good songs. I think there has always been and will always be a connection between music and fashion – the two are linked – you can’t have one without the other, really.

Grant: There will always be those bands who have more of a worked-at image.

Some of your songs ( in particular Local Boy) give a rose tinted, almost nostalgic view of London. Is it somewhere you like living nowadays?

Luke: I guess it’s a love / hate thing. It can be a great place and really exciting sometimes, but there’s a lot of shit too.

Joel: When we’re out on tour, it’s nice to come back to London.

Luke: It’s certainly an inspiration as a place, as far as song writing is concerned – the day to day goings on of the city in which we live…

Joel: Yeah, we write about everyday life, but whereas something like the Streets is pure observation, it can be interesting to romanticise it a bit, more like Morrissey, I guess.

Your current single, She’s Got Standards, recants the age-old tale of groupies – Is it describing a particular experience?

Joel: It’s a generalisation really about the situations you find yourself in…

Joel: Ha! I guess there’s a fair bit of hedonism – drink’s the main vice because it’s always there…

Luke: Yeah, if you’re doing a gig or whatever, there’s a lot of sitting about with nothing to do!

What do you make of the independent scene today? Do you think websites such as Myspace have been a force of good or not?

Joel: I guess with so many bands out there and so much interest in guitar music at the minute, its becoming quite cut-throat, but its always good to see a healthy interest in music.

You’ve cited Oasis’s Knebworth gig as a pivotal inspiration to play music. Ten years on, do you think they are still a relevant musical force?

Joel: Definitely Maybe was a great album of its time, but I think its more Grant that mentioned Knebworth…

Luke: He was the nerdy one who’s always loved music since he was ten!

Grant: Yeah, I was really into Nirvana for ages around that time too. It was a great time for music. I’m not sure about what Oasis’s output nowadays, but that’s what happens, isn’t it?

Joel: History has shown that most bands have only one, maybe two great albums in them – that’s certainly the case with Oasis…

Do you fear that creative staleness will set in after your imminent album release?

Joel: It’s something I’m always aware of. When a band’s starting out, there’s a passion and drive that comes from being hard up against it, striving to succeed. You dig deeper in adversity, but then it’s easy to get used to the lifestyle that comes with success.

Luke: When you reach that stage, I think your whole perspective changes and your not writing songs from the same point of view anymore, so it’s no wonder that it happens…

Joel: You have to push yourself creatively, and I feel we always have.

What bands do you rate at the moment?

Joel: Milburn are great – we’ve been touring with them and their live show is really good. I’ve been listening to Jose Gonzalez’s album too, which isn’t similar to us at all but its really well played.

Luke: I agree. I like the Dirty Pretty Things album as well.

Joel: Oh, and the Yeah Yeah Yeah’s last single… It’s more particular songs rather than bands that I hear and really enjoy at the moment, quite like back in the Britpop days.

Luke: The Arctic Monkeys’ album is starting to lose appeal now. There was so much hype, I feel I got it out of curiosity more than anything, so there was never that joy of finding it yourself. I can’t think what they’ll do with the sound next. Like we were saying about Oasis, the follow up may well be a bit of a let-down…

Released on Monday 10th July, No Love Lost looks to prove itself a sterling effort of a debut too. For my tuppence worth, fifteen minutes with The Rifles was a most enjoyable experience and even if they seemed unruffled by their trajectory towards fame and fortune, I thought I’d better leave them to get back to their day job. 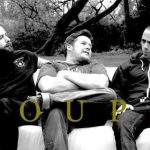