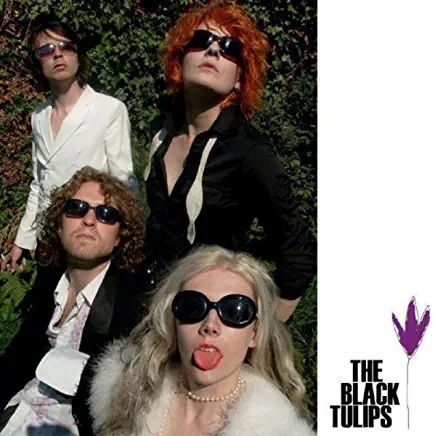 There’s a hornet trapped somewhere in this flat. I can hear it and it’s incredibly angry. Perhaps I’d better roll up some newspaper to create a makeshift hornet-swatter? Or maybe I should just lock myself in the loo until it’s gone?

Panic over – what we actually have here is some aggressive guitar sounds, which act as the waspy intro to ‘Just Keep Coming’ by The Black Tulips. The lo-fi fuzziness is something of a theme, with wiry drums and frizzy bass throughout. But this general trashiness seems to be The Black Tulips thing; almost every instrument reaching the point of distortion at some point on the record.

In continuation, ‘I Don’t Want You’ uses a funky riff, with aforementioned static-crackles, to good effect while lead woman, Alexandra, spits out some punky sounding lyrics that probably don’t mean what I think they do – then again, maybe some kind of counselling may be in order.

Final track, ‘Sad Sally’, sounds like a pissed version of Hole (okay, they were probably drunk much of the time too – but imagine them somehow MORE inebriated then usual!) This makes a total of 100% insanely ripped up tunes with jazz-esque detachment.

In case I haven’t already made this abundantly clear, this record is absolutely fantastic, but you’re going to have to be a fan of real alternative punk and rock to agree with me.

We have all seen how crazy the rock icon’s of the past 50 years have been and if they’re anything to go by, this band are gonna make it.