Negotiating my way past the security team, who seem intent on sending me repeatedly between the front door and the stage door for no apparent reason, I eventually get myself into the restricted space behind the stage of Kentish Town’s largest venue by tailgating someone who actually belongs there.

Climbing up thirty or forty flights of stairs with photographers in tow, I emerge in The Forum’s penthouse green-room, which is characterised by mismatched furniture and overlooks the church next door. Comfortably arranged in a scatter of musicians, Caroline Alexander and her band are relaxing before their headline slot. Hijacking this serene moment, I had a chat with Caroline and guitar-man Al Gregg.

Where did the music come from?

Caroline: ‘My older sister used to listen to Black Sabbath and Guns n Roses. It got me into heavy music and I wanted to do it myself.’

Al: ‘Skunk Anansie are a massive influence as well, but all of the musical influences came from Caroline’s family.’

Caroline: ‘I started off just singing along to the songs and ended up having lessons from Glyn James, a West End vocal coach. He taught me how to breathe properly to get more power into my voice.’

So where did the band get together?

Al: ‘I first met Caroline because she was in a musical. We were in ‘The Five and Dime’, which is a 60’s musical about a venue being closed down and people trying to keep it open. Her voice was so good we decided to start a band.’

Caroline: ‘We recorded ‘Hong Kong Garden’, it was a great song to define our sound.’

Al: ‘We wanted to mix rock, goth and all our other influences. Caroline sang it with a real edge and gave it different quality to the original.’

Caroline: ‘The defining moment for me was when I met Ace, he was already a hero to me because I love Skunk Anansie, so when they said he might be able to produce one of my records I thought they were teasing me. I couldn’t believe it when he actually turned up.’

Caroline: ‘The songs can come from anywhere. I got the idea for ‘Yellow Baby’ when I saw a jaundice baby on the news. I phoned up Al who put a riff to it. It’s always very spontaneous.’

Al: ‘It can be the lyrics first or the music first. It always comes together in a different way. It’s rock music, but very mixed with heavy bits, acoustic bits and lots of melody.’

Is it all smooth sailing then, or do you ever clash over the musical direction?

Caroline: ‘We’re actually all really close. My Uncle plays in the band and I’ve known Al for a million years.’

Al: ‘It’s a real team effort, with a powerful front person. There’s no hierarchy because everyone is important.’

So what can we expect tonight?

Al: ‘We’re going to move things from rock to mellow and back.’

Caroline: ‘We might burn the place down with candles… you’ll have to wait and see. I’ll be changing into my corset soon!’

Does Al have to wear a corset?

Al: ‘Not tonight. I had to be a transvestite for a Comic Relief advert in 2003. I had to shave my legs for that. I trained to be an actor in the 90s and I’ve had a few speaking parts in soaps. I’ve played mostly cops or bad guys – I even conned Ian Beale by pretending to be a blind man. I’ll do anything for money. I’m not a prostitute though!’

Does the acting help with music video’s?

Al: ‘I didn’t appear in the video to ‘If You’, but it was a lot of fun to make. In the video, Caroline force-feeds Elvis a burger before cutting off his quiff with a razor. The guy that played Elvis was heavy, he couldn’t get into the suit. It was really hot because of the lighting and they had to do a lot of takes!’

You’ve just released an album online, to be accompanied by ‘Suicide Note’ as a single, what is the plan for the record?

Caroline: ‘We just want to see what develops – what kind of response we get from the music.’

Al: ‘The album is just online, it’s not physical, which makes it a bit different for us. So we’re going to be pushing the single a lot. It’s a really powerful song.’

Caroline: ‘It was important to give the fans an album though, this record isn’t about getting recognition from the industry, it’s more important to get respect from your peers and enjoy making the music. Ace produced ‘If You’, ‘Yellow baby’ and ‘Suicide Note’, which are all on the album. He’s also working with us on the new record.’

It’s time for corsets, hats and last minute preparations, so it’s back down the stairs and into the venue to head over to the bar where, incidentally, Caroline used to work! The album, ‘Sounds from the Underground’, which includes the new single ‘Suicide Note’ is available now.

Hell Is For Heroes - Live (Instill / Get Amped / Easykill / Keiko) 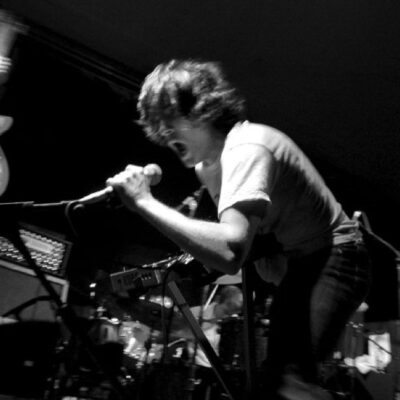