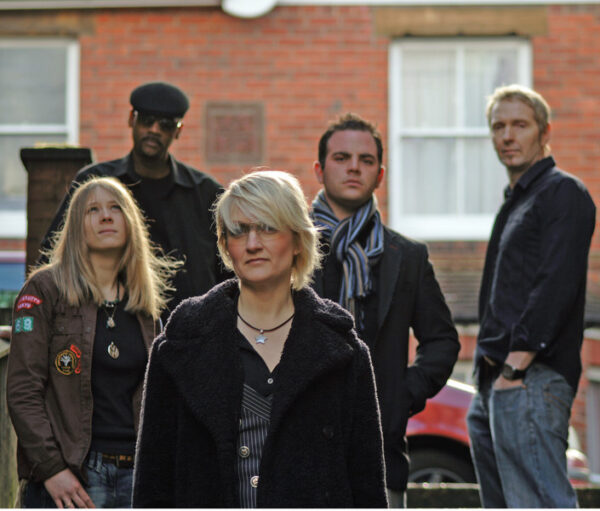 Sunsoma are a five piece from Surrey, consisting of Mel Spicer (vocals), Mark Potter (drums), Ian Spicer (bass), Dan Bowtell (guitar) and Leonie Avenant (keyboard and BV’s). Their press release is impressive with a good number of live gigs and festivals under their belt over the last couple of years along with a session on BBC Radio 6 with Tom Robinson and radio-play on various local, national and web based stations.

Having recently signed a deal to have their music played on one of O’Neil’s surf competition DVD’s, you might think their style would be the type of screaming vocals, shredding guitars and the sort of jumping up and down with their trousers falling to their ankles you come to expect in a surf video. But no, what you get is a very well crafted slice of indie rock for all of us who have been around the block a few times, have heard it all before and have all lied about it to each other.

The band are very democratic when it comes to the music (as per their name of which Sunsoma roughly translates from the Greek for ‘joint-bodies’ fact fans) which consequently has a nicely evolved feel to it wrapped around Mel’s lyrics. In fact the lyrics seem to be the driving force behind the band and are clever, managing to paint a very vivid picture in your head during the songs.

‘Summer Sun’ is a bittersweet opener with Leonie’s single finger keyboard drawing you into a melodic song in which Mel’s voice is reminiscent of Debbie Harry in the 80’s. The song brings with it an almost punky statement of not ‘being scratched out’ of a ex-lovers life, ’cause I can’t change for you or anyone’ which comes across strong and maybe live would be even stronger, but on the CD it just feels a little too clean.

Moving on to my favourite, ‘Your Sky’ kicks off with a good jangle guitar intro from Dan, before heading into breathy emotional tune that reaches out, pulls you in and almost gets you bopping towards the end of what is great love song without any frilliness.

The main hook of ‘Wider’ is the surging vocals which appear about halfway through the track almost bordering on the anthemic during the chorus. Here you can feel what the band are about and it gives you a hint of their live sound and energy. On the CD it comes across as controlled (maybe a little too much) but is defiantly bubbling away just under the surface.

On this offering Sunsoma prove they are certainly talented and one to watch in the future. My only slight worry is that the 3 tracks on this demo, while of different tempos and feelings, are a little too similar in style. They are all very well written but occasionally I found myself wishing that sometimes they lost their clean guitar and vocal sound and rocked it out a little bit – not that I want them to change their sound completely, just to expand it a little to add an extra dimension and depth (which I would put money on being present in their live performances).

With three fab and intelligent tunes the right producer and backing could easily see Sunsoma could break away from the pub circuit and start getting some serious airplay and interest.