This latest demo from Brigade contains two new recordings of previously released songs intended to show how the band has developed since the original rough recordings.

‘Stunning’ is the first of the tracks to be given a makeover with a recording that has captured not only a decent drum sound, crashing guitars, and bass but also more of the emotion in the vocal, which is clearly an important element of their sound. This song was already one of their stand-out tracks and they have now done it justice with some additional ideas in the structure and backing vocals.

Second track, ‘Go Slow’ starts off with plenty of space in the muted sound. The drums are the main focus initially with guitars slowly gathering more importance as the song progresses. The chorus is a total classic with melody and guitar both adding hooks to the biggest section of the song.

These two songs are a leap in the right direction for this band, who can usually be found working hard on the live circuit.

If you’ve never heard of Brigade, they are like a manly version of Placebo, which means the same emotional rock but at a different hormonal level with hints of Feeder and early Radiohead. This recording represents just what the polished Brigade sound can achieve and it’s, well, stunning really.

Volume – Blind / Do The Knowledge 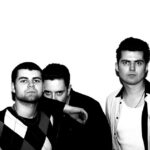