There is something about Lennon’s that just doesn’t agree with me. It’s as if the venue wants me to show my dedication to the cause before welcoming me into the lovely musical sanctuary that lies within its walls. The first time I came here they forgot to give me my cashback and this time I’m not on the list on the door. All it means is that I have to pay like everybody else… however, for an egotistical prat such as myself, this is easier said than done. I’m joking of course but this place does seem to make me work for my admittance. It’s always well worth it though.

Due to the small amount of people at this gig I start chatting to The Waysters’ manager who works as a promoter in the Portsmouth area. As they take to the stage he reiterates to me his respect for these 15/16 year olds and their ability to handle all the pressures put upon gigging bands; be it whilst playing in front of hundreds of people or (as with tonight) the equally demanding task of performing in front of a skeleton crowd of a couple of dozen.

Their tactic is to let the songs do the talking, allowing the front man to demonstrate a confidence and swagger far beyond his years whilst knocking out the impressively tight Libertines/Arctic Monkeys style tunes. All of the elements of a great rock band are here; musical proficiency, catchy hooks and attitude. Let’s hope girls and other teenage disputes don’t get in the way of these youngsters fulfilling their obvious potential. Rock on, little dudes.

By the time The Waysters finish, the place has filled out quite a bit and we’re getting closer to the kind of hustle and bustle that I’ve grown accustomed to at Lennon’s. Apparently this isn’t good enough for Peter Lyons and his Fiction Theatre. Two songs in, he quips something about it being the ‘emptiest I’ve ever seen Lennon’s‘ which ‘has to be the night I’m playing‘. One song later he ends by remarking ‘thanks…‘ swiftly followed by what sounds like ‘…fuckers‘. By this point I am ready to completely disregard any of his musical expression. Why should I pay attention to somebody who thinks he is above his audience from the word go? Has he ever heard of winning over an audience? The posters describe him as what Brian Wilson would sound like had he ‘been in his prime in 2006’, although I’m not sure ‘Good vibrations… fuckers’ would have gone down quite as well in 1966.

But I suppose I should give the guy some coverage. Maybe I am completely misreading him. Maybe I was blinded by the t-shirt that reads ‘fuck your 80’s fashion dance’ as well as the total disregard for his audience’s enjoyment. Maybe I just really dislike angry self-obsessed artists who have ideas above their stations and then wonder why people don’t hear the genius behind their masterpiece. Or perhaps the reality is that despite moments of genuine catchiness and the occasional dual-vocal harmony success, it all just gets a bit too droney. Sometimes the injections of electronica work and sometimes they don’t, but it’s hard for me to appreciate anybody who thinks they deserve a sell-out audience by right. On the bright side, if Peter Lyons is even half as good as he thinks he is he will be signed and become huge. C’mon Peter, prove me wrong.

After that I am ready for anything remotely fun or danceable. With Lyons circulating the crowd I pray for an 80s tune to come on so that I can do the robot on his toes and watch his face turn from white to a deep red colour. It doesn’t happen, so I return to reality and hope that our Editor was correct about Little Green when he complimented the creativity of their song writing.

The place is packed when they begin, just as it was when the impressive Maccabees performed here a short while ago and blew me away in their own jump-started jerky fashion. Little Green’s driving chord-based distortion-laced riffs lend themselves to this crowd of half-cut young groovers, providing the soundtrack to quite a few questionable dance moves from clumsy movers such as myself (I try, but I always fail). Watching them onstage it’s quite hard to determine who the front man is as the guy stood in the middle keeps threatening to sing but never actually does. Eventually the taller, slightly off-centre guitarist takes control, accompanying the grunge with some crooned lyrics about something-or-other. The singing is not the main attraction of Little Green however, so I will speak of it no more.

As our Steve pointed out, creativity is their strong point. Little Green separate themselves from every other grunge rock band by putting together interesting song structures; taking the audience by surprise with tender moments that intersect verses of raucous fret-bashing and hair-flapping. As the set progresses the guitarists get more comfortable and start to really get into it, an invaluable asset to any band. In their enthusiasm tightness is occasionally forfeited however, in front of a crowd who want to be entertained, this can probably be overlooked. Tonight they provide the backing music for most people’s drinking conversations, but I’m sure with a bit of tightening here and there they will deserve more dedicated attention in the future. 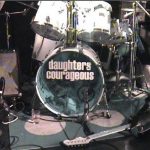