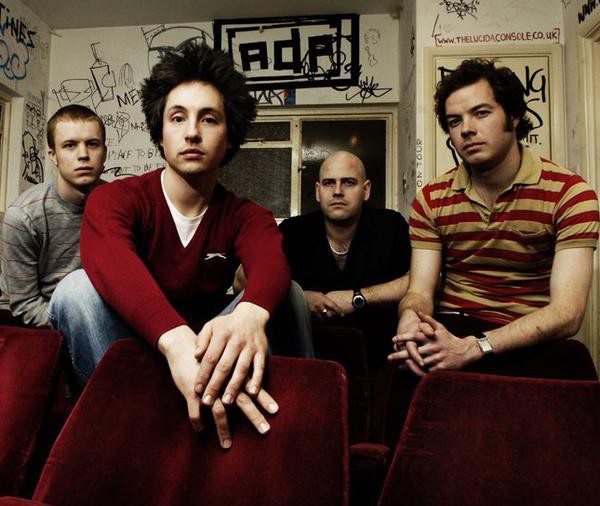 The Shakes
Live (One Flew Over)

The delightfully named One Flew Over took to the stage led by Sideshow Bob’s hair-twin. This photogenic four-piece (five if you count the hair as a separate band member) rock band from London come complete with a set of wind chimes, girlie groupies, and a drummer who can’t keep his trousers up.

The set started with a promising crash of cymbals and a foreboding riff, and within seconds they established themselves as intense rockers. The first few songs had all the frantic energy of the Chilis’ ‘Give It Away’ but other songs showed a softer, more composed side à la Lost Prophets.

The lead singer (Sideshow Bob) swayed like a reed in the wind or writhed on the floor in a frenzy depending on what each song dictated. The lead guitarist proved that the most diminutive of blokes is capable of producing massive riffs that can make a guitar vibrate and a foot pedal launch into space. The bass player provided harmonies so superb he should be made joint vocalist, complemented with the most exquisite facial expressions I’ve ever seen – god I love being close to the front at gigs, makes a nice change from staring at the backs of people’s heads all night!

In this fun, satisfying set, each track had many carefully crafted musical layers that were perfectly implemented; One Flew Over have polish, timing, and style. They ended the set with the traditional ‘gathering around the drummer to raaawk out’. The crowd were head banging and the endorphins were racing.

There’s nothing like a much-hyped band, that fills a Tuesday night gig to bursting point, to make you want to ‘get critical’. Unfortunately, there’s not much to diss about The Shakes, either with their new single ‘Liberty Jones’ (this was the launch party) or the rest of the set. And believe me, I tried.

The indie boys set up with what seemed to be an interestingly large number of instruments for just four band members, including two keyboards, a harmonica, and a kazoo. After a few sound effects to get the atmosphere established, we were off. The first song ‘A Year Alone’ was very drum-led with a guitar-rich chorus and a jazzy keyboard section, and at this point, one might draw comparisons with Hard Fi or the Kaiser Chiefs.

Track two was concerned with aspiring towards a better life/wife/car/house. It had a country twang and the lead singer played acoustic guitar while lighters were held aloft until Ordinary Boys style Mod marching at the end. The third and best song so far was about a Valentine and had a great poppy chorus. The singer pointed Delays-style in the air as he played the keyboard in a number of intriguing ways.

Other highlights included: a snappy new song about a photographer and a model with an Arctic Monkeys vibe; a dance-about, happy song that featured the kazoo, tambourine, and maracas and evoked a holiday feel, and crowd-favorite ‘Goodbye New York’ which included the spitefully honest lyrics ‘When I left I keyed your car’. Classic.

The single, ‘Liberty Jones’ had the place dancing about gleefully and singing along to each and every word. I was touched to see open adoration from the fans and genuine gob-smacked humility from the band.

Probably my only criticism would concern the vocals. They’re good, but they’re not distinctive and at times the singer sounded like he was straining to hit the notes. Similarly, the backing vocals are adequate but nothing to write home about.

Overall a great gig from a highly watchable band that really go for it live. I hate to be the last person to jump on the ‘Britpop is back bandwagon’ but I predict The Shakes could well be the next big thing. You mark my words.