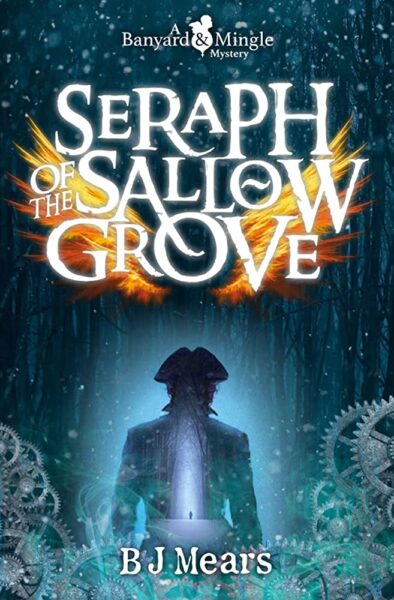 B. J. Mears
Seraph of the Sallow Grove

In this fourth instalment of the Banyard and Mingle mysteries, Seraph of the Sallow Grove, it starts strong. Within a couple of chapters, it’s clear that this is the biggest case to date. The connections start to form once the investigation starts, but the mystery keeps you guessing until the very end.

The regressive post-apocalyptic society is on the brink of war, but the class-based divide in Camdon City is as wide as ever. It’s the eleventh and final month of the year, the old people having done something so drastic they seem to have changed the planet’s orbit. The city is smothered in ice and snow.

A series of gruesome discoveries at Sallow Grove are just the beginning, with the Mysteries Solved team scrambling to piece together the connections while working alongside the corrupt law enforcement organisation, the Drakers.

The story involves a number of locations, so the two maps at the front of the book provide useful geography. There’s something magical about maps that help you fit the story into a 3D space in your head. The larger scale map shows the forests and marshes to the south and the great coastline to the east, while the smaller scale zooms in on Old Camdon, showing roads and points of interest along the River Tynne, Bunson Street, and Rook’s Bridge.

The Banyard and Mingle series draws on many genres, including steampunk, ghostly tales, detective stories, and metaphysical fiction. The investigations provide an anchor for the story and for wider themes that weave throughout the four books, including some developments for the strange inhabitants of Mars Zonam, the dagomites, as well as for Jinkers, the oddball neighbour.

Mears has created a spectacularly detailed world for these stories. Like the locations, the words used for recognisable items are different, but recognisable. You don’t need a companion book to understand immographs or black bean soup – they become neat mechanisms to immerse yourself in the world, which is a future that has lost the knowledge of 20th century advancements.

Seraph of the Sallow Grove is an excellent addition to the series.

When the fearsome Lord Draker approaches Banyard and Mingle for help, they are immediately on their guard. Two high-profile silkers have been murdered with chilling precision, their bodies unearthed in a snowbound, sallow grove – but why would the chief of police come to them?

As the body count rises, a terrible pattern emerges, confronting Banyard and Mingle with their greatest challenge yet. Facing deadly threats and political pressures, Banyard discerns a sinisterly sacred motive and Mingle a risky opportunity to make their investigation pay.

But can they prevent the next murder? And will the true killer be apprehended? (Synopsis)