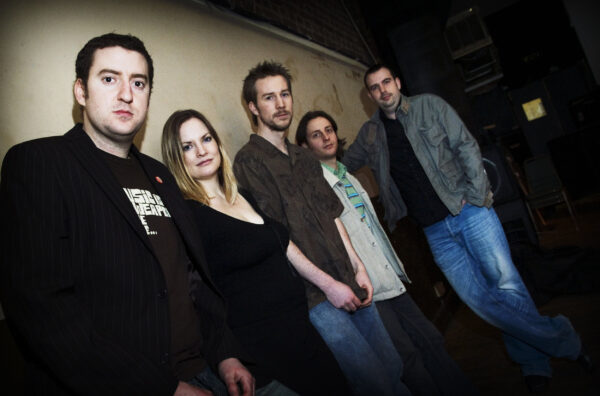 First onto the stage to face the family-thronged Talking Heads crowd was Secluded. Disconcertingly familiar, this three-piece sound like the love child of Nirvana and Placebo, though it’s a love child that has been taught some manners. They’re pleasing to the ear, but fail to excite as originality is somewhat sacrificed in favour of playing it safe.

As a covers band they’d do well; the lead singer keen to showcase his imitative Kurt / Brian singing ability. Nevertheless, they did a good job of warming up the crowd and very much started to build the bridge for this generation gap pleasing evening.

Next up was four-piece band Valhalla. Launching into some funky rhythms from the bass-playing lead singer, the two talented guitarists taking up the flanks were the real show stealers. Looking every bit like extras from Wayne’s World with their 80s leather jackets and floppy hair, the bass-led trio worked well together, even leaving room from some true air-guitar style riffs.

Dabbling in a mix of styles, reminiscent of both Black Grape and the Chilli Peppers, the slightly strained singing and over-enthusiastic cymbal playing from the drummer were the only let downs. Somewhat lyrically challenged, it was Valhalla’s covers of classics from Motorhead and Lenny Kravitz that really got the crowd excited and most effectively showcased their skills.

Afro Snatchers were the third band of the night. Funky, edgy, and mellow at the same time, Afro Snatchers are quick to get the toes tapping. Lacking a natural lead singer, the vocals alternated between the bassist and guitarist, who each looked as though they’d drawn the short straw when it came to their turn. Both preferred skilfully jamming away in the shadowy recesses, leaving the spotlight to glare unrelentingly on the eerily empty centre mic.

Following Afro Snatchers came the real treat of the night; the unpronounceable Ben Dlugokecki and his band of accomplished musicians. Already raising a stir in the south, frequent comparisons to David Gray are starting to sound trite but remain a remarkable accolade considering his youth. And for all the hype, he didn’t disappoint, despite a welcoming message to the crowd of ‘you lot stink of poo!’

Instantly captivating the audience with stretching, melodic vocals so rarely heard outside of a recording studio, Dlugokecki knows he’s onto a good thing. He opens confidently with the forthcoming single ‘Set in Stone’ – a powerful, building track with gorgeous keyboard harmonies. Setting the precedent for the rest of the set, Dlugokecki’s unashamed lyrics about love, flowers, and his girlfriend dodge accusations of cheesiness with their sincerity. Songs such as ‘Bluebells and Bluebirds’ would be easy to dismiss as clichéd, but the genuine belief and conviction with which they are played is infectious – you can’t help but smile.

The feel-good folk / rock edge of tracks such as ‘You Get Me’ are reminiscent of acoustic Levellers tracks, leaving the feeling that a violin wouldn’t go amiss in parts. The band is tight, polished, and professional with each musician considerately getting his moment of glory – most memorably the impressive solo guitar ending of ‘Upon Landing’. Over-arching all this is Ben himself – a natural front man who takes command of the stage and clearly relishes every moment of the packed set list.

Already mastering the art of a good encore, the last few songs of the evening were a highlight. An acoustic duet with fellow singer Emma Philips in ‘Borders to Break’ took the edge off Dlugokecki’s voice, revealing a softer, richer vocal. And ending the set was a full-band rendition of one of Dlugokecki’s most epic and ambitious songs; ‘Insecure’. Beginning with melodic keyboard and acoustic guitar, before the powerful and defiant build of bass and drums, this song is anything but.

Dlugokecki are the feel good band of the summer. Singing about the simple things in life (arguably that which really matters) they belong in a warm, sun-filled festival field. ‘Do us all a favour and smile a smile for us’ sings Ben. Well, Dlugokecki, we’re smiling.