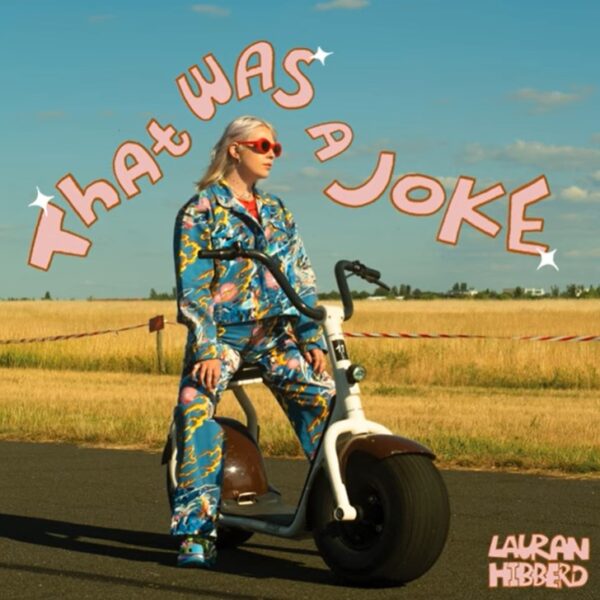 Lauran Hibberd
That Was a Joke

Things are gearing up for Lauran Hibberd’s Garageband Superstar, and ‘That Was a Joke’ is one more reason (on top of ‘I’m Insecure’, ‘Step Mum’, and ‘Still Running (5k)’) to jiggle excitedly in anticipation.

The song has instant Hibberd pop-quirk in the intro, a stuttering verse, a funky pre-chorus, and a chorus that flows like an efficiently evil showerhead when you’re eyes are filled with shampoo and you’re grabbing at the dial while panicking in the suddenly icy torrent.

The lyrics are the most down-to-earth social commentary since Sleeper’s ‘What Do I Do Now?’, telling the story of someone who is doing just fine without you… except they aren’t. The plot ladder here is so relatable you’ve almost certainly felt this way before.

You don’t have to have experienced a break-up to appreciate this track, though. It’s got pop sparkle and a signature quirkiness that you only get from Lauran Hibberd. There’s a nod to Hole in the ‘I’m so happy’ line that is unparalleled anywhere else in the song. Few bands can do stuff like that successfully, but this shows us how to do it well – just like the subtle Grohl-tints in ‘Step Mum’.

It’s a crime that there’s no music video for this as a literal telling of the story is crying out to be made for this song. Nevertheless, you can listen to it and conjure the picture in your own head.

Watch Lauran Hibberd – That Was a Joke.

Lauran Hibberd – That Was a Joke Lyrics

Here’s our transcription of the lyrics, because we love ’em so much. They also haven’t made it onto the usual lyric sites, which means if we don’t drop them here you won’t be able to sing along. We might not be 100%, so shout at us on social if you disagree.

I wear long johns now you’re long gone
I play the bass, use a different toothpaste

Since you left me, oh, not much has changed
I’m so happy I forget your name
I can’t even remember your face, ha ha ha

I cut my hair, get free healthcare
I go shopping, don’t buy you things

And now
Because you left me, oh, I’m saving money
Find my new meat, talk to anybody
I’ve never been so carefree and funny

I’ve been so happy!

(Chorus / half a capella)